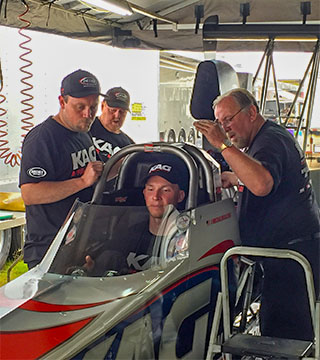 The Dreher Motorsports braintrust of Randy and Jared Dreher tuned the KAG A/fuel dragster to the #2 qualifying position with a 5.299 second lap to kick off the weekend.

Back in the driver’s seat for the first time in just under a year, Kyle Michalek kicked off his third season behind the wheel of the Dreher’s nitro-burning A/fuel dragster in style by posting a career best 5.299 second elapsed time at 267.96 MPH to sit in the provisional #1 qualifying position. The Michalek/Dreher combo then reeled off a 5.356 second lap at 267.00 MPH and a 5.326 second lap at 270.16 MPH (new career best MPH) in the remaining qualifying sessions to enter eliminations in the #2 qualifying spot. This starting spot marked the team’s best qualifying effort in National Event competition.

Still riding a high from resetting his personal best ET and MPH, Kyle Michalek broke down the team’s qualifying performance.

“It’s tough being out of the car for an extended period of time; I was probably more nervous for the first qualifying pass than I was racing in the final round of the Norwalk regional a few years ago,” said Kyle. “I knew we had a great race car and I didn’t want to overthink the run and make a mistake. It was a huge confidence booster to run a 5.29 right off the trailer, and we followed up with two more great runs in the low to mid 5.30s. The car was quick and consistent throughout qualifying which set the tone for a great overall weekend.”

Take a ride on the Kenan Advantage Group sponsored A/fueler as it blasts down the Houston quarter-mile en route to a 5.379 second elapsed time at 259.11MPH and a round win over Mia Tedesco.

Due to early Saturday rain showers, the first round of eliminations for the Top Alcohol Dragster class was postponed until Sunday morning setting up an action-packed day of racing with extremely tight turnaround times in between rounds. Kyle Michalek kicked off eliminations against the #15 qualifier, Chase Copeland, and was the first off the starting line with a .067 second reaction time to Copeland’s .075. The KAG A/fueler launched hard and was on another solid lap before the engine fell silent just after half-track. Copeland, in the left lane, went into immediate tire-smoke and enabled MBR to coast to victory, crossing the finish line in 5.878 seconds at 177.81MPH. This victory marked Kyle’s first round win in National Event competition.

After returning to the pits, the team diagnosed the mechanical malfunction from the previous run to be a broken crankshaft. With a compressed timeline leading into the second round of eliminations, the Dreher Motorsports team of Randy Dreher, Jared Dreher, Red, and Matt Stout kicked it into overdrive to swap motors in time to get the car back to the starting line for a quarter-finals matchup against Mia Tedesco. Tedesco, the 2015 NHRA Four-Wide Nationals winner, would have lane choice from her 5.395 second run in the first round of eliminations.

“It felt great seeing the win light come on after our first round win against Chase Copeland; however, I knew the car was hurt and we had some work to do before second round,” said Kyle. “The timeframe was tight and the pace was frantic, but we overcame the mechanical adversity and got the engine change complete in under an hour. Everyone pitched in and we got the job done; it was a key moment in our weekend and while it was stressful at the time, those are the moments in the heat of battle that make great teams. Even though we didn’t have time to start the car in the pits before second round, I had faith in the team and knew Randy and Jared would provide a good tune-up to give us a shot as long as we were able to get to the starting line.”

Lined up in the right lane, Kyle was first off the starting line once again (.044 to .106) and he never looked back winning wire-to-wire with a strong 5.379 second pass at 259.11MPH to set up a matchup with David Brounkowski for a chance to race against Randy Meyer in the final round for the Wally. In what ended up being the closest race in all four rounds of eliminations, Brounkowski was able to eliminate the MBR and the KAG A/fuel dragster with a slight jump off the starting line (.025 to .047) and a margin of victory of just 0.0151 seconds (approximately 6 feet). 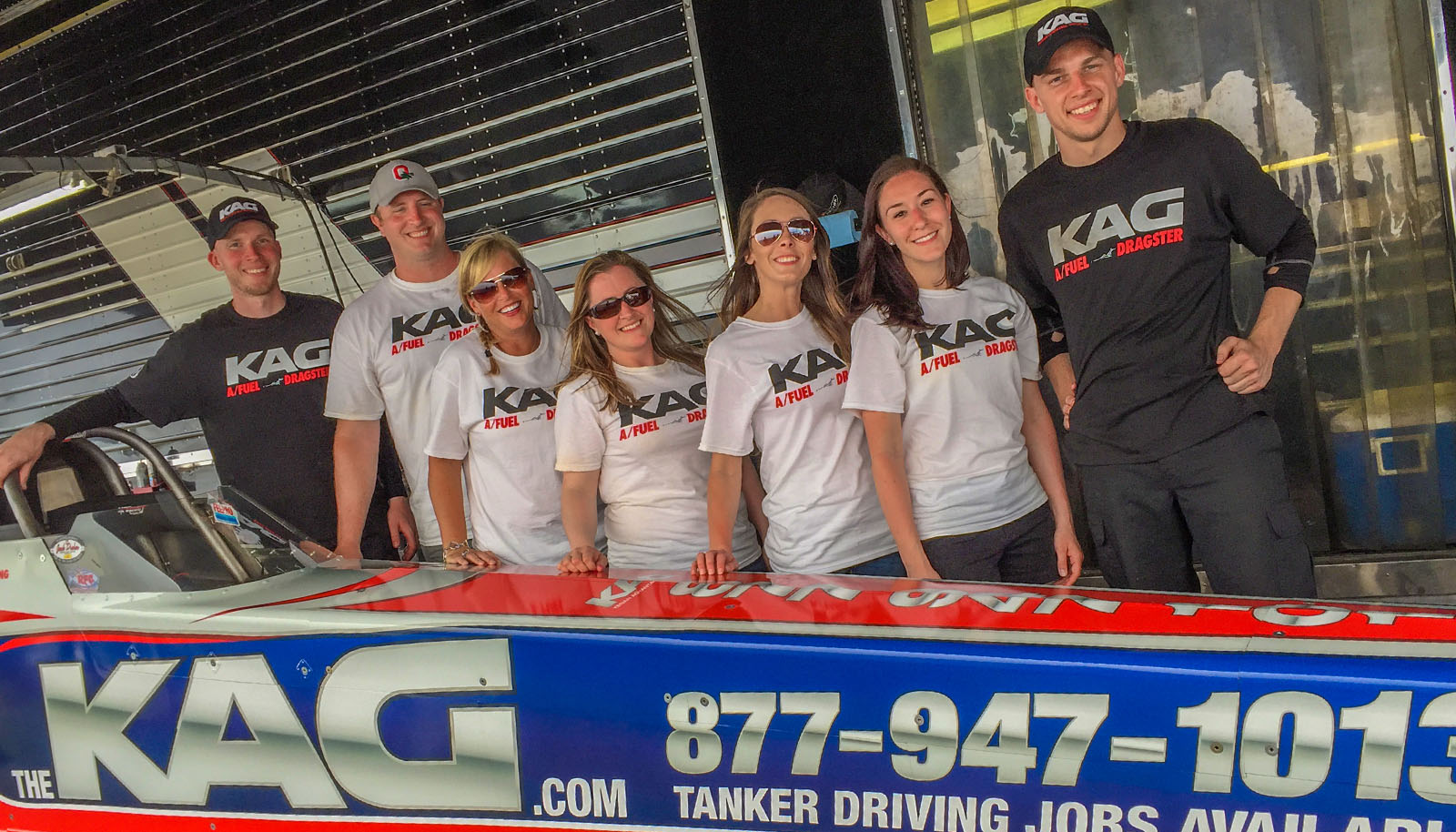 “We had a great weekend on and off the track,” said Kyle. “The car ran well, we picked up a couple round wins, and we were able to introduce NHRA race fans to the great job opportunities as KAG truck drivers and mechanics currently available at www.thekag.com/race. I’m very excited for the future of the MBR/KAG collaboration and thankful for the opportunity to have the KAG team’s support.”

MBR returns to the track July 3-5 for its 3rd annual stop at the Summit Racing Equipment NHRA Nationals in Norwalk, OH with Corey Michalek behind the wheel. The Kenan Advantage Group will once again serve as the team’s primary sponsor for the event and Champion Spark Plugs, Fel-Pro, Speed-Pro, Sealed Power, and GoPro will continue to provide additional support.