Rookie driver Kyle Michalek and the Dreher Motorsports team wasted no time in setting the pace for a break out debut weekend. Kyle went to the top of the class on Friday night during Q1 with a time of 5.398 seconds @ 259.86 MPH which was good enough to put him in the #2 qualifying position. This strong performance was indicative of what was to come for the remainder of the race weekend.

The Norwalk fans packed the grandstands all weekend long and they reset the single day track attendance record on Saturday with close to 47,000 in attendance.

Qualifying resumed Saturday afternoon and Kyle was able to make a solid run in the heat of the day with a 5.469 second pass that would provide valuable tune up information for raceday conditions. Heading into the final qualifying session, Kyle was safely qualified in the #2 position and the team had the privilege of running in the last pair of Top Alcohol Dragsters.

“The Summit Motorsports Park experience never disappoints and this was no exception,” said Kyle. “As the team pushed the car up to the starting line for Q3 on Saturday night I looked up and saw a standing room only crowd of close to 45,000 people, a single day track attendance record. That was a really special feeling knowing that many people care about the sport that we are so passionate about and it really got me pumped up to showcase the Champion Spark Plugs A/fuel dragster in front of such a large audience.”

Since the team had nothing to lose, they chose to go after the #1 qualifying position but overpowered the track in the process, resulting in tire smoke at the hit of the throttle. The team was still able to hold on to the #2 qualifying position and they were positioned to contend for the Wally on Sunday during eliminations.

Corey helps put the finishing touches on the Champion Spark Plugs A/fuel dragster before heading up for the semifinals!

The old adage stating, “it is better to be lucky than good” held true during the first round of eliminations. Jeff Veale experienced mechanical problems during Kyle’s first round matchup giving Kyle a solo pass into the second round. Jeff’s bad luck turned out to be Kyle’s good luck as Kyle’s dragster immediately went into tire smoke at the hit of the throttle forcing Kyle to abort the run.

The team went to work back in the pits between rounds and made the necessary tune up adjustments to take on seasoned veteran Robin Samsel in the semi-finals. Kyle was first off the starting line and never looked back as he got the win on a holeshot beating Samsel’s quicker, but losing, 5.47 to Kyle’s 5.48. Just three weeks prior, Samsel and his crew member Dave Hill signed Kyle’s Top Alcohol Dragster competition license upgrade at the NHRA division 3 regional event at Indianapolis. Going into the finals at his first race, Kyle was matched up against the three time NHRA North Central region champion, Marty Thacker. The team gave a great effort but came up just a little bit short as Thacker ran low elapsed of eliminations with a 5.40 to Kyle’s 5.45 second pass.

“Going into eliminations I had some pre-race jitters but they quickly disappeared once I was strapped into the race car. I knew that I had to concentrate on running my own race and not worry about the guy in the other lane. As we advanced through each round my confidence continued to grow. All-in-all, this was a dream weekend during my first race in the Top Alcohol Dragster class. My expectations were far exceeded and I really appreciate the support that has been offered to me by other competitors from within the sport. Congratulations to Marty Thacker and his team on a great effort in the final round and also to Chris Foster, who we used to race with in the IHRA Alcohol Funny Car ranks when we worked on Mark Thomas’s pit crew. Chris and his team have developed a strong program and it is great to see them be successful,” said Kyle.

“I am truly humbled by the success that we experienced this weekend and could not have done it without the support of family and friends, Champion Spark plugs and the associated Federal Mogul brands, and the Dreher Family.” 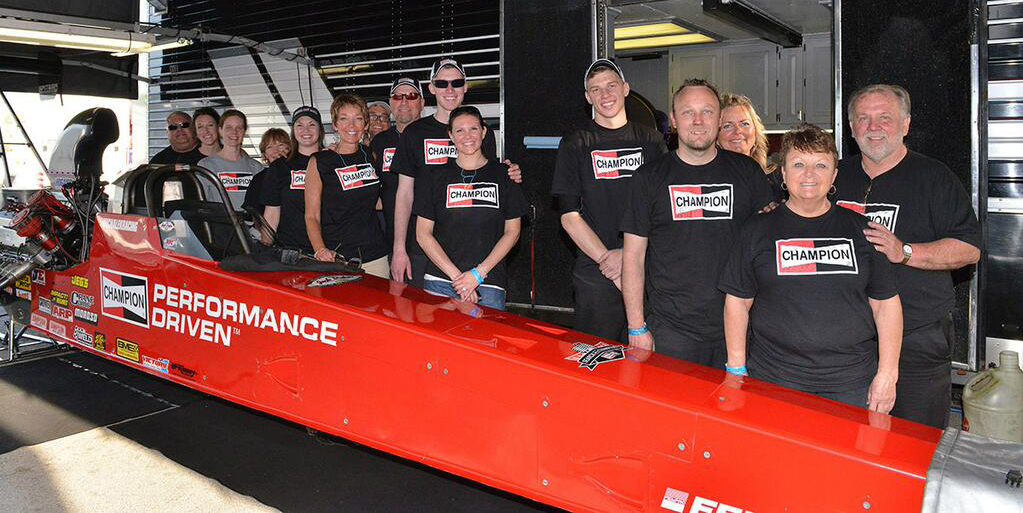 Dreher Motorsports, Michalek Brothers Racing family, and friends all came together to make this an unforgettable weekend at the track. (Photo credit: Steve Fuhrman)

“The Dreher’s immediately accepted us into their racing family. They made us feel welcomed and they provided the support that enabled me to improve each pass as a new A/fuel dragster driver. Make no mistake about it, this is Jared’s car and it was a privilege to have the opportunity to drive it. Their team has a wealth of experience and racing knowledge and they come to the racetrack to win, but once racing is over for the day they are genuinely group individuals who are great to spend time with.”

Michalek Brothers Racing looks to build upon the momentum gained from this past weekend’s successful outing and plans to be back on the track again in the near future. Details concerning the team’s next event will be announced in the coming weeks once plans are finalized.