Corey Michalek took home the Wally in his competition debut behind the wheel of a 270MPH A/fuel dragster.

Over the course of 3 sunshine-filled days at Bruton Smith’s spectacular ZMax Dragway, MBR covered the quarter-mile at new career best speeds and elapsed times. Corey Michalek duked it out with a stout field of 21 other Top Alcohol Dragster drivers in an attempt to capture 1 of 16 qualifying positions up for grabs to compete in eliminations. The team’s first day on track in 2014 was met immediately with adversity as their 3,500 horsepower nitro-injected dragster experienced mechanical problems during the first session of qualifying causing an aborted run. After thrashing to get the car ready for the evening qualifying session, the team collectively agreed to sit out the second run to ensure all problems were fully addressed. At the end of Friday, Corey was on the outside looking in with only one qualifying session left to get in the field.

“The first day was tough, to say the least,” said Corey. “My biggest thing coming into the weekend is that I really wanted to get from A to B on the first run allowing me to get comfortable in the car again, and then try to get solidly qualified. Losing both runs built up quite a bit of anxiety on Friday night because nothing had gone according to plan for my first day as an A/fuel driver, and I knew how difficult of a scenario we would be facing the following day.”

Saturday brought new hope, but also added pressure, as the team prepared for one final attempt to qualify the Champion Spark Plugs A/fuel dragster. In order to make the field, Corey would need to run significantly better than his current career best elapsed time of 5.55 seconds. Car owners and tuners, Randy and Jared Dreher, spent all of Friday night going through the car looking for potential problems. When the light turned green during the last qualifying session, the car responded just as the team hoped. Corey blasted down the track stopping the clocks with a new career best elapsed time of 5.32 seconds, and a new career best speed of 266 MPH. That run was not only good enough to qualify, but it sent the team into eliminations in the top half of the field at the #5 spot setting up a first round match up with Matthew Cummings.

“Getting qualified was the biggest relief of the weekend. We have all the faith in the world in the Dreher’s, but we also understand the unpredictability of a race car with nitromethane in the tank. There was a lot of anxiety going into that last run,” said Corey. “On top of that, I had only made 2 full runs in my whole life in an A/fuel car prior to that point so there was a lot going against us.”

“When it left the starting line, it carried the front wheels for well over the first 100 feet, and I knew it was on a lap as it pulled all the way through the finish line.”

Following the final qualifying pass, the car began a string of exceptional and consistent performances to carry the team all the way to the final round on Sunday evening. MBR and the Dreher Motorsports team wrenched and drove their way through eliminations with 5.32, 5.31, and 5.32 second passes as Corey eliminated Matthew Cummings on Saturday evening, multi-time champion Randy Meyer in round two, and 5-time World Champion Bill Reichert in the semi-finals.

“We definitely had our work cut out for us as we worked our way through ‘murderer’s row’ just to get to the final,” said Kyle. “This is a tough class, and we understand how special it is to go rounds at this level.” 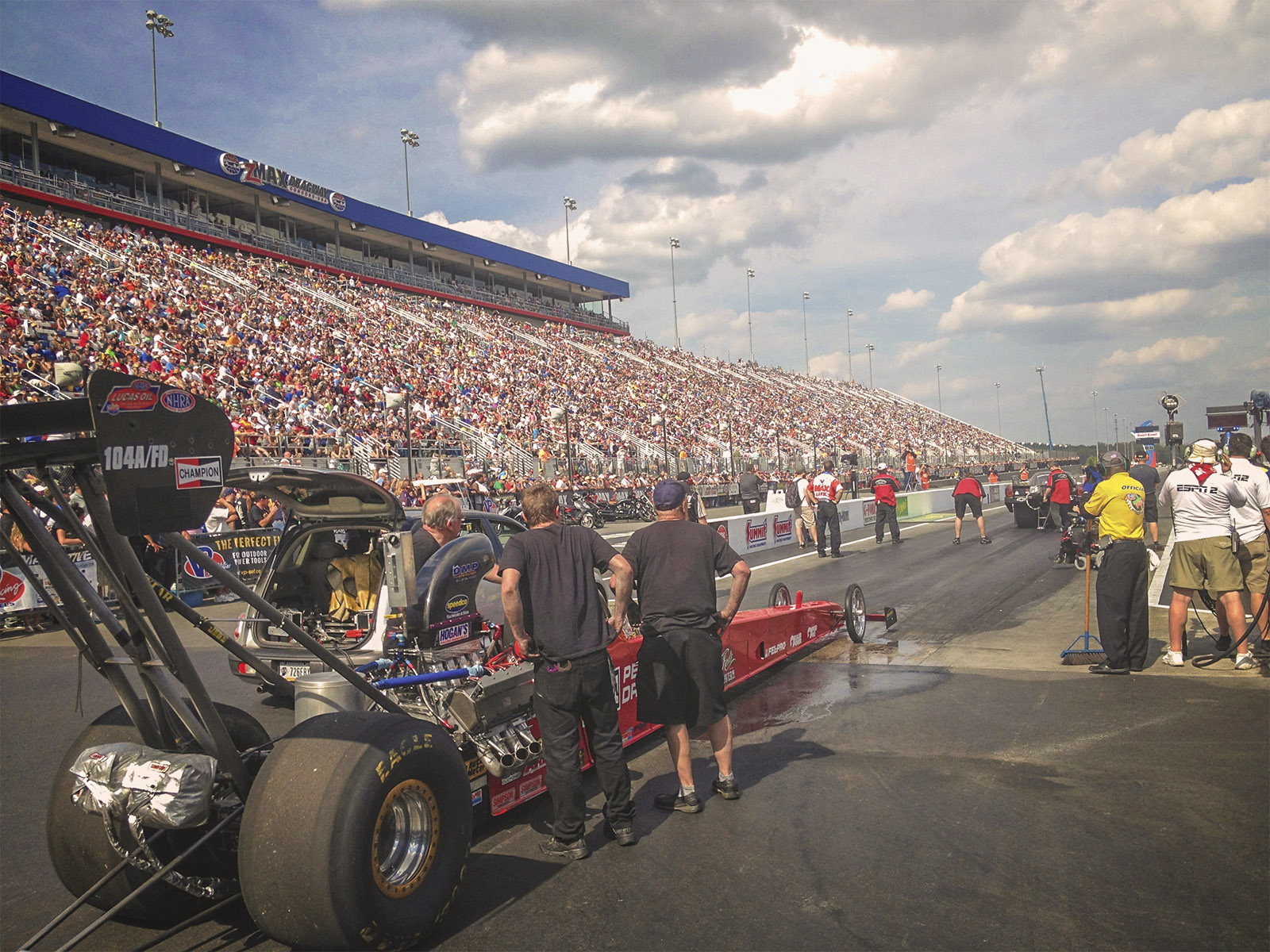 Corey Michalek patiently awaits the final round inside the Champion Spark Plugs / Dreher Motorsports A/fuel dragster in front of a packed house at ZMax Dragway. 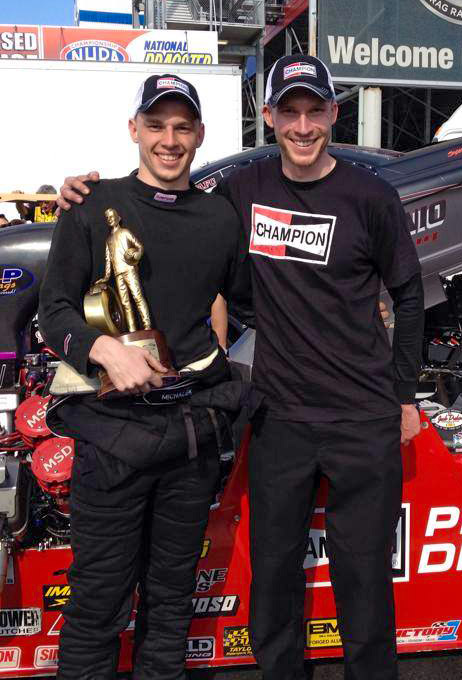 Kyle and Corey celebrate the victory in the staging lanes with their first Wally trophy.

Corey then squared off against the defending 2013 North Central Region Top Alcohol Dragster Champion, Brandon Booher, in front of a packed house with the event title on the line. Booher’s car suffered mechanical issues after the burnout causing a delay on the starting line that worried the team as heat continued to build in the already warm power plant of the Champion Performance Driven entry. When both cars were finally able to stage and take the green light, Booher’s mechanical issues ended the race early as Corey crossed the finish line uncontested in 5.42 seconds at 266 MPH to take home the event victory in his first career start.

“When the car left the starting line in the final, I could hear Brandon’s car rev up and launch, but after that everything got pretty quiet,” said Corey. “The final round was the only time all weekend that I saw the win light come on and it was pretty much pandemonium in the car once I got the parachutes out and everything back under control. Even though things started out tough, we knew Randy and Jared would fix whatever was affecting the car’s performance and they absolutely delivered. We raced as a team, the Dreher’s provided a competitive car, and I did my best to leave on time and not make mistakes. Things really came together for us and we couldn’t be more excited about the final outcome. It’s really a dream come true for us.”

Not only was this MBR’s first NHRA national event win, it was also the first for MBR’s teammates, Dreher Motorsports. Randy and Jared Dreher have been consistent contenders within the Top Alcohol Dragster class for years on the NHRA tour, winning multiple regional events, and this victory represented a much deserved first trip to the Winner’s Circle at a national event. Kyle and Corey presented the official race-win Wally to the Dreher’s to express gratitude for the opportunity to race their car, and to be able to collaborate with a safe and professional operation.

In addition, the Charlotte victory also represented the latest milestone of the continuously prospering MBR and Champion Spark Plugs partnership.

“It was very special having Champion Spark Plugs on the car as the primary sponsor during the Charlotte race,” said Kyle. “It was great being able to promote the Champion, Fel-Pro, Speed-Pro, and Sealed Power brands on a national stage, and to be able to bring recognition to all the support they have given us over the past 3 years. We would not be in this position without them.”

MBR returns to action May 16-18 in Norwalk, Ohio for the 8th annual Mickey Mart Rewards Cavalcade of Stars presented by Budweiser.