In a weekend marred by electrical gremlins and wet, humid conditions, Michalek Brothers Racing (MBR) suffered a first round loss at the hands of Brandon Greco by .0003 seconds, approximately 1 inch, while racing side-by-side at over 268MPH.

“Two years in a row I’m heading into the offseason with a ‘what if…’ on my mind,” said Corey. “This gives me perspective because I was on the other side of a very close race with Mia Tedesco back in 2015, but to think that we were less than one-thousandth of a second from moving on to Sunday is a very tough pill to swallow. The sting of the outcome will be an additional source of motivation for our team as we work through the offseason in preparation for 2019.”

After qualifying in the #9 position with a 5.469 second lap at 264MPH, MBR pulled to the starting line late Saturday afternoon for a blown vs. injected-nitro pairing against the Greco Racing team. This matchup marked the third time in the last 4 national events for MBR that Corey has squared off against Greco. Coming into this weekend, MBR held a 2-0 round win advantage over the Pennsylvania runner.

When the tree flashed, both drivers got off the line within 18-thousandths of a second of one another before encountering nearly simultaneous instances of tire-shake on both sides of the track. Both Greco and Michalek were able to get their cars to recover and Brandon’s 5.423 second lap at 262.39MPH was enough to hold off Corey’s 5.441 second, 268.06MPH comeback effort. 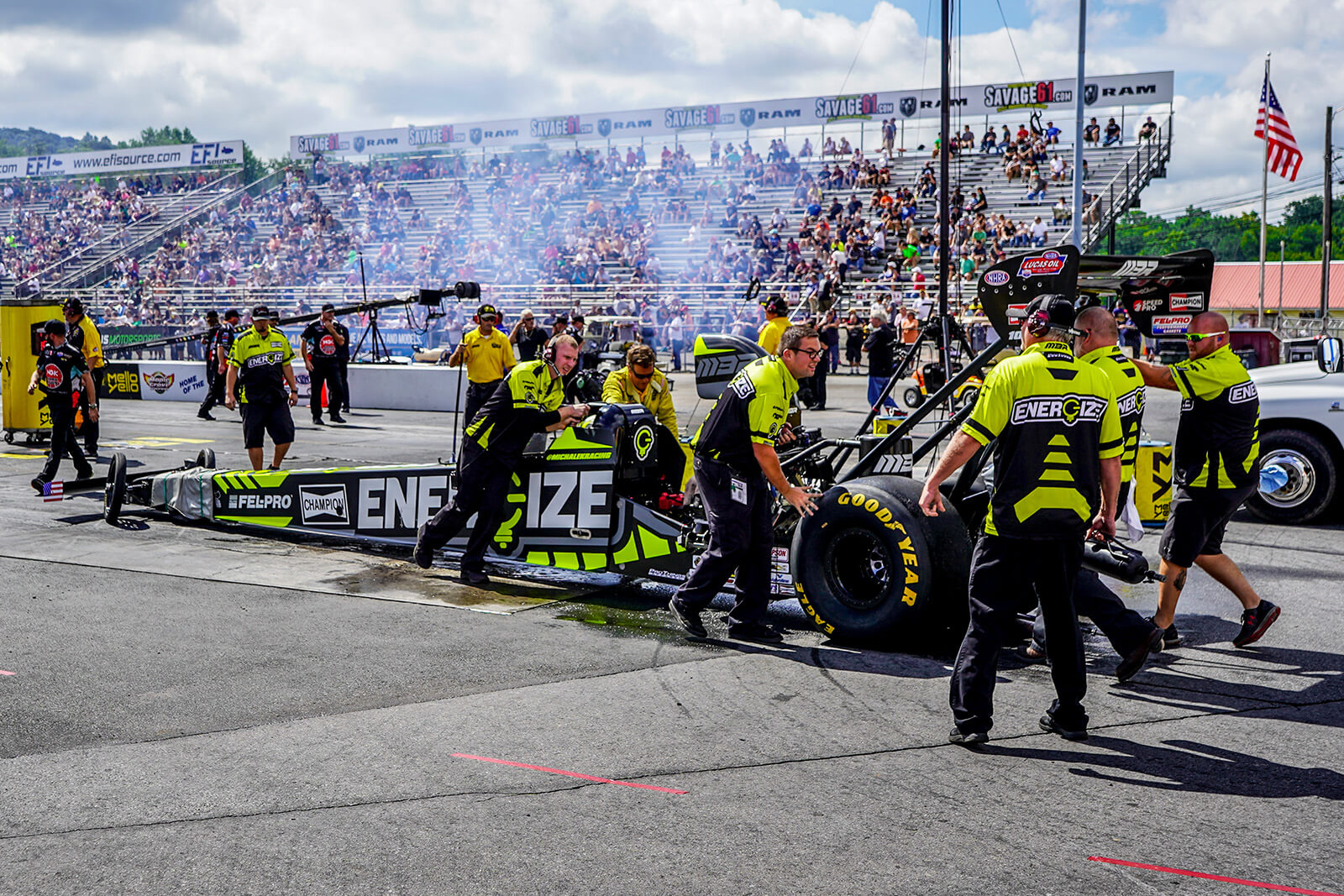 MBR battled adversity all weekend long but the team was able to rally to a 9th place qualifying position to match up against Brandon Greco in the first round of eliminations.

“Adversity was not in short supply this past weekend, but I’m proud of how our team kept pushing to keep us in contention,” said Kyle. “We obviously would have liked to turn on a few more win lights, but for only having 20 laps on our car, we have made substantial progress over the past 2 years and are positioned to build upon what we have learned to become a consistent competitor within the class. We have a lot of work to do over the off season, and we can’t wait to get back on track next year to take care of unfinished business.”

While the final results of the weekend were less than what the team was hoping for, MBR looks forward to a return trip to eastern Pennsylvania in late 2019.

Ride onboard with Corey Michalek as he tries to chase down Brandon Greco in the first round of eliminations at the 2018 Dodge NHRA Nationals.

“I really enjoyed getting an opportunity to compete at Maple Grove Raceway,” said Corey. “This was our first time ever competing at the track with our own equipment and it’s such a unique facility. Aside from the disappointment of the final results, our positive takeaway for the weekend was the way that our team banded together and performed through adversity.”

“In the ongoing evolution of team roles, Kyle is beginning to delegate a handful of the between-round maintenance tasks that he previously owned in an effort to spend more time with Chase and Clay Copeland learning about the setup and tuning decisions. While we only made three runs during the course of the event, the car was serviced and prepared flawlessly for each run by a collection of crew members that were solely owning their responsibilities for the first time, and we gave ourselves a chance each time we pulled to the line.”

With the conclusion of the Dodge NHRA Nationals, Michalek Brothers Racing now looks to the 2019 season where the team has ambitious plans to attract new corporate partners, run an expanded schedule, and look for an opportunity to compete for an NHRA North Central regional championship.