Michalek Brothers Racing and Gutierrez Brothers Racing lined up their Top Alcohol Dragsters three separate times throughout the day at the 44th running of the Kelly Services Night Under Fire.

For the third time in 4 years, Michalek Brothers Racing (MBR) and Gutierrez Brothers Racing put on a side-by-side show in front of a record-breaking crowd during the 44th running of the Kelly Services Night Under Fire in Norwalk, OH. In the event’s lone show round, J.P. Gutierrez’s 5.29 second lap at 266MPH edged out MBR’s 5.38 at 271MPH prior to an area-wide power outage forcing an early completion to the evening.

“I still get chills thinking about the moment when we pulled up to the starting line in front of 50,000 people at Night Under Fire,” said Kyle. “We had so much fun sharing our sport and passion with the folks at Fund That Flip, The Empowerment Alliance, and all of the fans that packed Summit Motorsports Park this past weekend. It is a privilege that we don’t take for granted to be able to race at this level, and we’re so thankful to have the opportunity to do this with such great partners!”

Outside of the on-track action, the day was highlighted by massive gatherings for MBR’s primary marketing partners: Fund That Flip and The Empowerment Alliance. The Fund That Flip team entertained nearly 70 employees and family members at the track while The Empowerment Alliance engaged race fans at the event all day long by giving away free t-shirts to those who signed up to join the movement to support American energy independence. 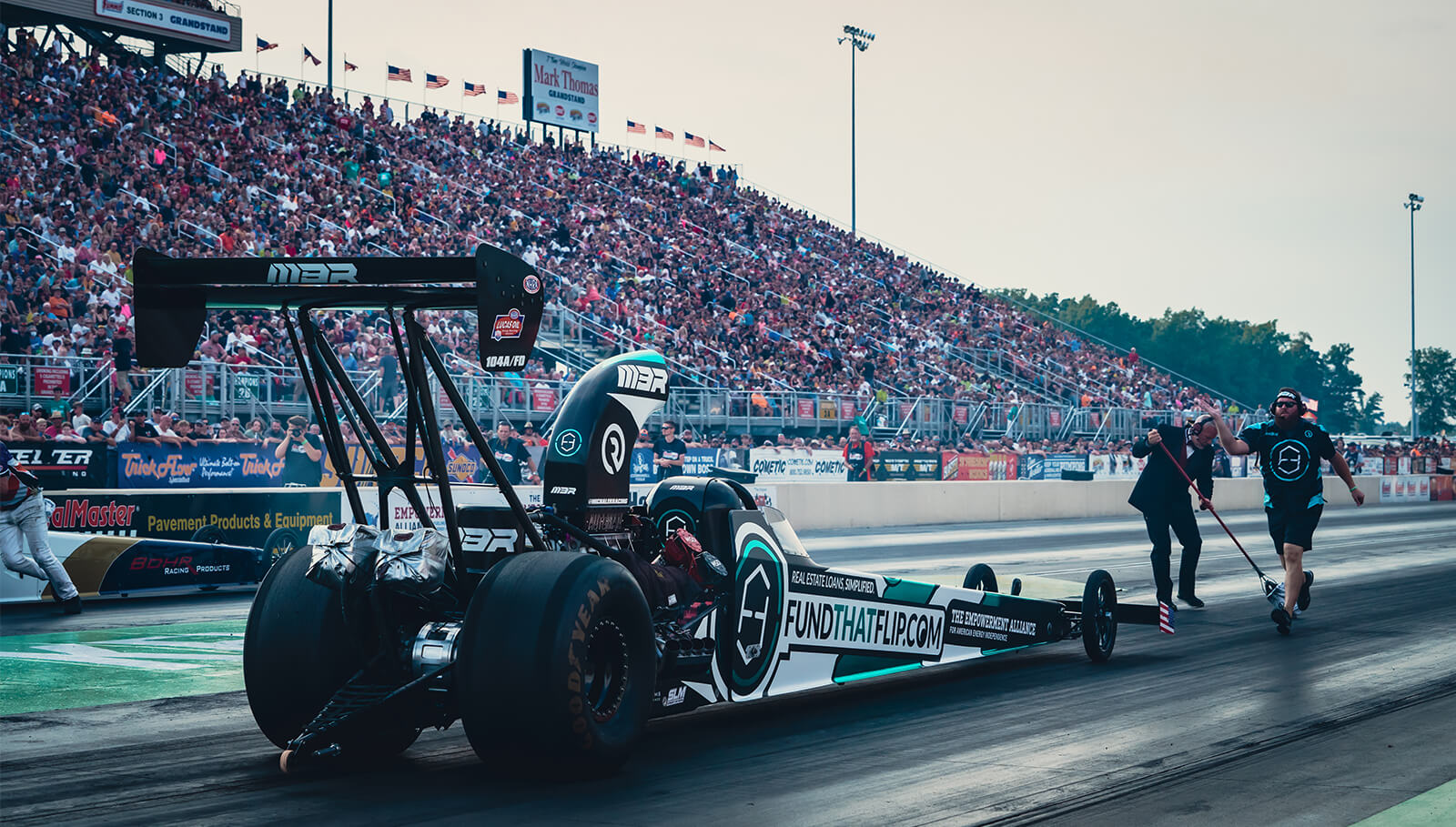 The Fund That Flip / Empowerment Alliance A/fuel dragster was on display in front of over 50,000 people at the 44th running of the Kelly Services Night Under Fire. (Photo: Krista Zivcic)

“It was another unforgettable day at Night Under Fire,” said Corey. “We’re very fortunate to have had the opportunity to participate in this event for the third time and we would like to personally thank Bill Bader Jr. for extending the invitation to do so. It was amazing to have the level of in-person support that we did from both Fund That Flip and The Empowerment Alliance at the track, and the number of fans that were interested in signing the online declaration to join The Empowerment Alliance was super exciting.”

“We were also really pleased with the progress that the car made on track as we head into our final two races of the year on the NHRA tour. We have spent the past few races evaluating the setup of the car, and each time we’ve taken it out we’ve seen it incrementally improve. We pulled out of Summit Motorsports Park with a lot of optimism having made 2 of our 3 best runs of the year while knowing that we’re still very much easing into our new combination. We’re excited to continue chipping away at it even more in just a few short weeks.”

After three consecutive outings in Ohio, Michalek Brothers Racing now prepares to head west to Indianapolis on Labor Day weekend for the NHRA’s most prestigious event: The Dodge//SRT NHRA U.S. Nationals
(get tickets).